Getting Hiring Right And The Different Types Of Employees 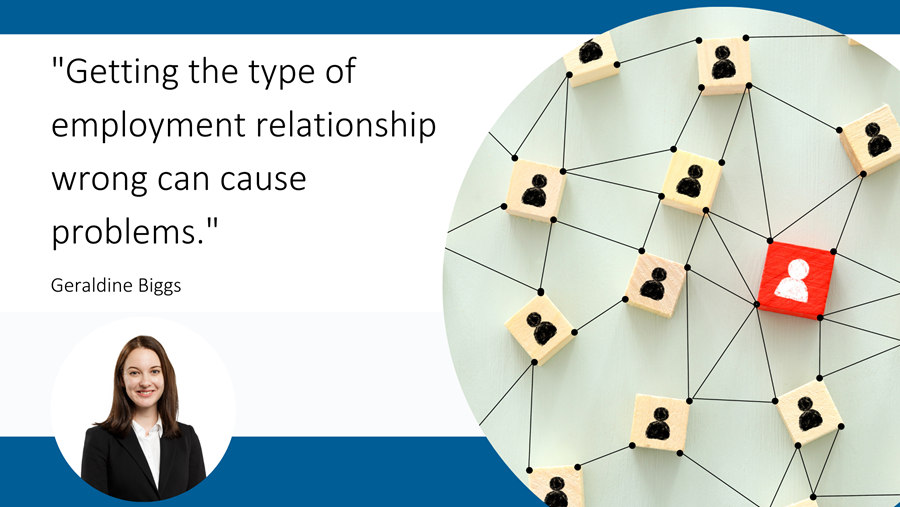 There are different types of employee.  It’s important to identify and agree on the right type at the start of any employment relationship.  Here are the options.

Permanent employees are the most common type.  They can be full time or part time.  They remain employees indefinitely (i.e.  until they resign or retire, or they might be lawfully dismissed with consultation for reasons such as redundancy or serious misconduct).

Fixed term employees are employed on a temporary basis.  They have the same rights as permanent employees except that their employment terminates by agreement at the end of the fixed term (i.e. at the close of a specified date or period, when a specified event occurs, or when a specified project concludes).

Their annual leave entitlements might be handled on a pay as you go basis (i.e. paid at 8% on top of their wages or salary) depending on the length of the fixed term.

Fixed terms are useful, for example, to cover someone on parental leave or if more hands on deck are needed for a particular work project.

There are strict rules about employing fixed term employees and how that must be dealt with in employment agreements.  If those rules are not followed, or the employment ends up drifting past the intended fixed term, the employee might be deemed to be permanent.

Casual employees work irregularly and have no expectation of ongoing employment.  They do not have to accept work and there is no obligation on the employer to offer work.  Each time a casual employee accepts work it is treated as a new employment period.   It’s often not practical for casual employees to take annual leave and so take 8% on top of their wages or salary instead.

The casual nature of the employment must be made clear in the employment agreement.  Things can change in reality however.   For example, if the employee ends up working regular hours and comes to expect ongoing work, they might be deemed to be a permanent employee.

Triangular employment is where someone is employed by one employer (i.e. an agency) but their work is directed or controlled by another party. This can happen with the use of a recruitment or employment agency, or when an employee is seconded to work for someone else.

This is a tricky one as contactors (sometimes called independent contractors) are not actually employees at all.  Contractors are self-employed and engaged by a principal party to provide services under a contract for services.  They don’t receive a wage or salary and instead invoice the principal for their services. They pay their own tax and ACC levies and don’t receive employment entitlements like the minimum wage, annual leave and sick leave.

While it’s always important to specify the type of relationship in a written agreement, that’s not the last word.  The courts will consider the real nature of the relationship to decide if a worker is an employee or contractor.

Does any of this matter?

Getting the type of relationship wrong can cause problems.

If a worker is mistakenly classified as a contractor rather than an employee for example, the employer could end up liable for unpaid PAYE, minimum wages, leave entitlements and penalties. Ending the contract might also amount to unjustified dismissal under employment law.

Similarly, employers might incorrectly deal with holidays or leave entitlements, or unjustifiably dismiss an employee, on the mistaken belief they were fixed term or casual, rather than permanent employees.

If you have any questions about the nature of a working relationship or require a written agreement, the Corcoran French employment team can help.