Back to Current
November
2021

Home Sum Insured – Make Sure Your Home is Properly Insured 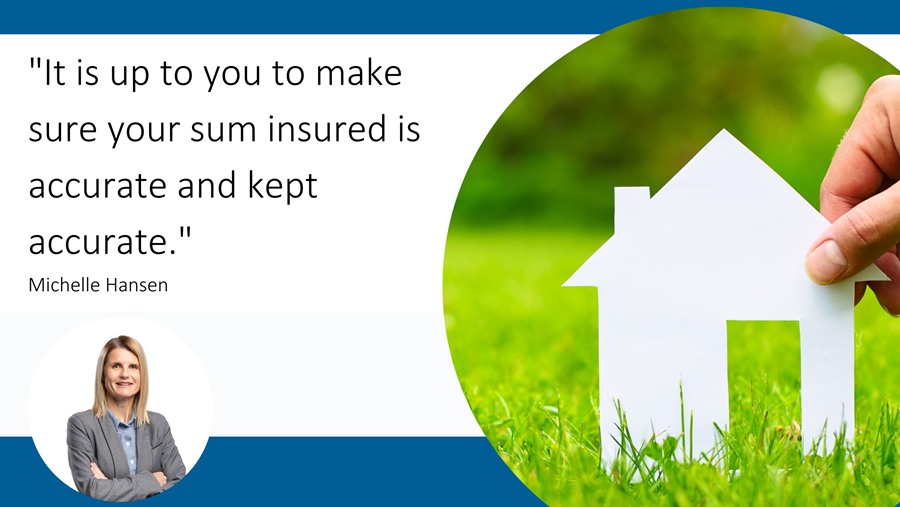 Recent sharp increases in building materials costs due to Covid shortages have been well publicised.  There is no doubt this will affect rebuild costs.  It is therefore prudent to ensure your home is properly insured.  Most commercial property owners must obtain an insurance valuation at least every two to three years but there is seldom any such requirement on home owners.

Take John and Jane for example:

After owning his home for a number of years John decided to obtain a professional insurance valuation.  He was surprised to discover he was 40% under insured.  The cost to rebuild John’s house was valued at $750,000 but John’s sum insured was only $450,000.  If John’s home had been destroyed while he was under insured he may have been left with a significantly smaller or lesser quality home, or found himself paying the additional $300,000 needed to rebuild his home to the same size and standard.

Hearing the outcome of John’s valuation prompted his neighbour Jane to also seek a professional insurance valuation for her home.  Jane discovered that she was over insured.  The cost to rebuild Jane’s house was valued at $800,000 but Jane’s sum insured was $1,100,000.  Jane was able to adjust her sum insured down and immediately save on her insurance premium.  If Jane’s home had been destroyed while she was over insured the assessor would have determined the replacement cost at $800,000 and the insurance settlement would have been based on that figure.  Jane would not have received the extra $300,000.  She would have paid more for no benefit.

Tips for determining the Sum Insured:

·         Professional Valuation: If you want accurate and up to date rebuilding figures, obtain an insurance valuation from a registered valuer.  The sum should be based on current building costs, not market value.  You will be far less likely to be under or over insured if you obtain a professional valuation.

With online calculators, the estimated rebuild cost is generated without a physical inspection of your property.  The data used may not take into account all relevant information.  In addition, it may not be accurate for very large or high value homes, such as those that cost over $2 million to rebuild, nor does it factor in special features.  If you use this option you should compare the results from at least three insurance calculators.

Whichever method is used, the valuation should:

o   Not include the cost of the land, just the property/structures built on it;

o   allow for current building standards to be implemented;

o   Factor in structural improvements that have been made to the property, like sheds, pergolas and fencing;

o   Include the cost of removing debris;

In the unfortunate event that you experience any loss and have difficulty reaching agreement with your insurer over the value of the loss, please contact us for advice on your legal options.